One State, One Future

In the state of Connecticut, several factors intersect to create a system of public school funding that is not only failing, but also incredibly challenging to navigate and subsequently difficult to reform.

Connecticut funds its public schools through 11 cumbersome funding formulas that create a piecemeal system, lacking adequacy, equity and transparency.  Furthermore, the state is not adequately providing for unique student populations, such as students with special needs and English language learners. Only one formula—the Education Cost Sharing (ECS) formula—takes some of students’ needs into account. Yet this formula is neither fully funded nor used by the state legislature to allocate education aid to municipalities. As a result, funding is also not adapting to changing enrollment numbers. We ended the 2016 school year with a deficit of over $200 million and anticipated ongoing deficits in future fiscal years, which led the Connecticut State Department of Education to lower its budget by $108.6 million, or 3.5 percent, despite growing student need. This decline in state funding exacerbates existing problems with equity, transparency and accountability. 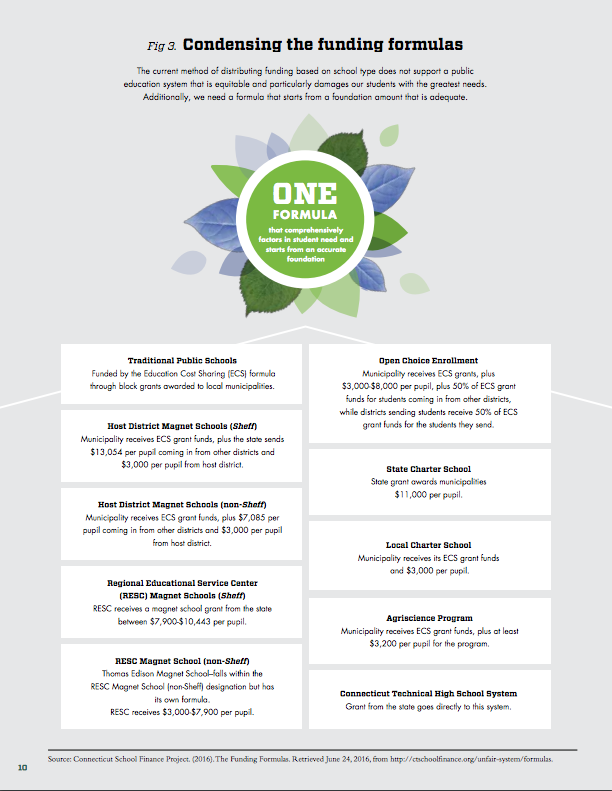 The current method of distributing funding based on school type does not support a public education system that is equitable and particularly damages our students with the greatest needs. Additionally, we need a formula that starts from a foundation amount that is adequate.

Issues at the state level trickle down to the district and school levels. Our highest-need districts create budgets without the proper supports and lack incentives to channel money to students who most need resources.

One State, One Future

About the Teacher Action Team

We are a group of 15 teachers who met for seven weeks to review research on national attempts to improve adequacy, equity, accountability and transparency in school finance.