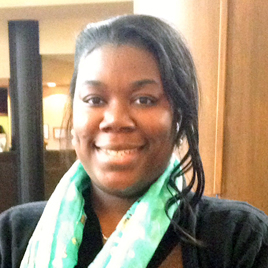 Syeita Rhey is a fourth grade teacher at Burr School in Hartford, Connecticut. In this conversation with E4E-Connecticut Outreach Director John Tucker, Syeita discusses teaching in the same city in which she grew up and the importance of being an active member in her union.

This interview has been condensed and edited.

John Tucker (JT): You grew up in Hartford – what made you choose to teach in the district?

Syeita Rhey (SR): I attended Hartford Public Schools through fifth grade, and then attended a private school in West Hartford. When I saw the disparities in resources between these two districts, I wanted to bring the same access and opportunities I received to the kids from my neighborhood, in order to make sure they also had a quality education.

JT: How has growing up in Hartford affected the way you teach?

SR: I remember being in the foster care system and dealing with DCF [the state Department of Children and Families] and social workers. When I first started off as a student in Hartford Public Schools, I didn’t talk a lot. Because of my shyness, I was labeled as a student with a learning disability. There was a time in second grade when I had a teacher who took an interest in me, and realized that my shyness didn’t mean I had a disability. She advocated for me to get retested, the special needs label was removed, and I eventually started performing on grade level. This affects me now as a teacher, because I go above and beyond to make sure that my students aren’t incorrectly labeled and treated as another statistic in the system.

JT: Why did you decide to get more involved in your union?

SR: I’ve been a union member since I started in 2007, but I decided to get actively involved when I was transferred to another school involuntarily. The year I was transferred, I had seven years’ seniority but, due to low student attendance at my school, teacher positions were cut. My union representative was extremely helpful if I ever had any questions, but she ended up going on maternity leave. Without a union representative at my school, there was no one to advocate for me. I realized the importance of being an active union member and eventually ran on a slate for the executive board. I’m now a union representative at my current school.

SR: My ideal union would have teachers, union leaders, and administration working collaboratively toward solutions. Teachers would be united and actively involved in the union, so that more voices could be heard.

JT: What excites you about E4E?