January 31 (New York) — Educators for Excellence-New York (E4E-New York), a teacher-led organization, celebrated the passage of A1715/S101A, which bans allowing teachers to carry guns in schools. Teachers largely reject proposals to arm classroom teachers, according to the results from a nationally representative survey of teachers across the country and New York City.

“We know the fear and anxiety guns create for our students - many of whom have experienced gun violence in their own lives,” said Eli Levine, a health and wellness teacher at P.S. 91X and member of E4E-New York. “Carrying a gun on my hip would erode trust with my students and make them see me as another threat. Now that arming teachers is off the table, we can focus on  expanding reforms that actually create safe classrooms - like restorative justice programs.”

Voices from the Classroom: A Survey of America’s Educators, released on August 1, 2018, found that:

“Adding more guns to schools introduces a volatile element that can lead to severe unintended consequences,” said Paula L. White, Executive Director of E4E-New York. “In New York City, we have wide racial discipline disparities and we know that biases play a role in perpetuating them. It would be naive to think that these biases would end with punitive discipline. Guns in schools make us all less safe, but especially students of color. The Legislature should take the energy that inspired this bill and pass measures that encourage safe and welcoming learning environments for our kids by expanding restorative justice programs - like promising programs in New York City’s District 18 in Brooklyn - that reform school discipline and improve school culture.” 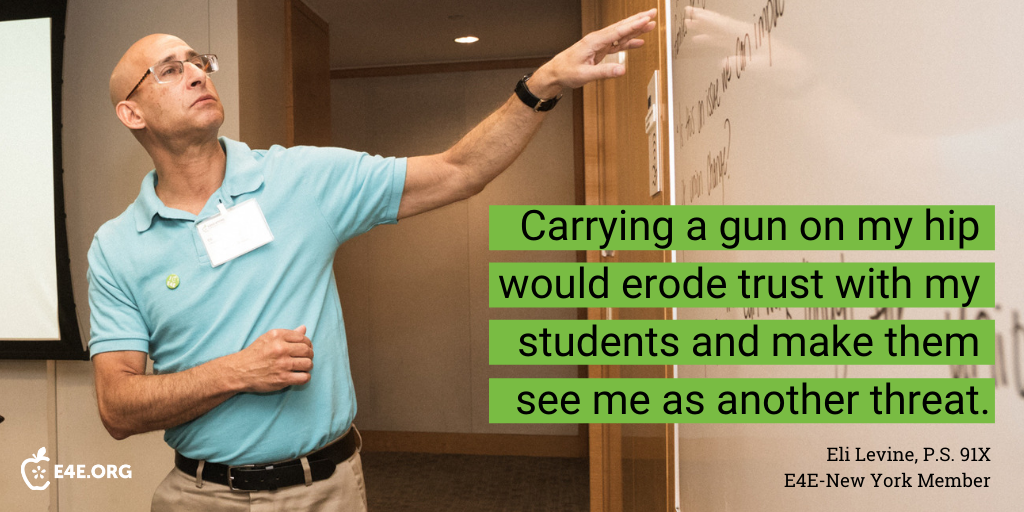