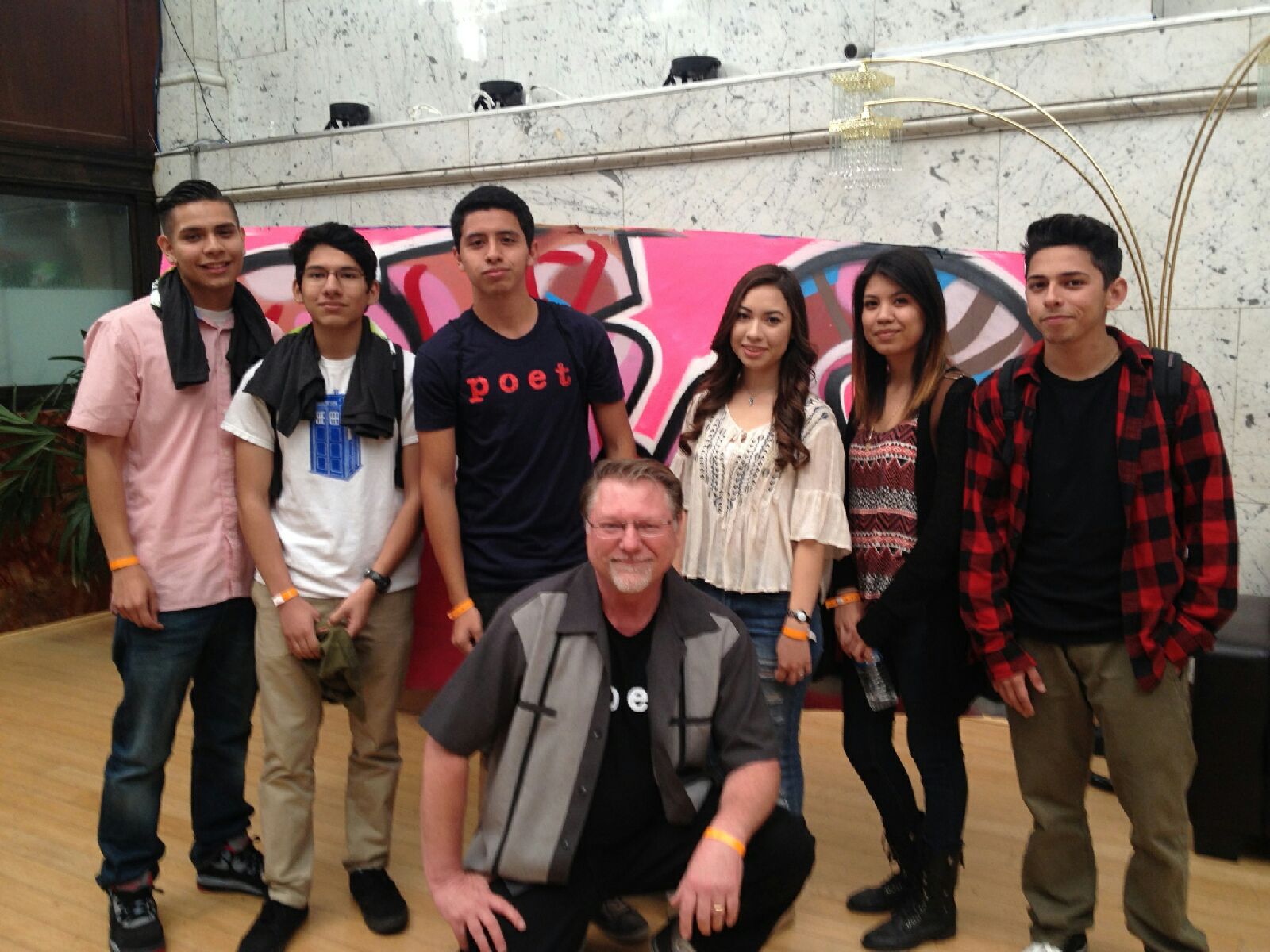 Tom Adams is in his 35th year of teaching in LAUSD and is currently teaching 10th- and 12th-grade English at Sylmar High School. Tom is an E4E Teacher Leader and 2014 Teacher Policy Team member. Both Tom and his student were recently published by Los Angeles’ Poet Laureate Luis J. Rodriguez.

This interview has been condensed and edited with the interviewee’s approval.

Jen Baca (JB): Why did you become an English teacher?

Tom Adams (TA): I always loved to read, and I wanted to spend my life reading great literature and sharing this passion with upcoming generations. The joy, freedom and fulfillment that I find through reading and writing began for me in school. I am driven to pass that torch to as many students as I can reach.

The reading and study of literature enriches our lives, and the deeper and broader that study, the richer we become. Literacy is a fundamental human capability that profoundly impacts our function within society. I am not only speaking about emotional, non-rational, non-practical applications, allegations that are often leveled at poetry and fiction by the uninitiated. On the contrary, the more we are exposed to and practice reading and writing of all kinds, the more useful and marketable our skills become.

JB: Why is going beyond non-fiction literature important and relevant to the Common Core standards?

TA: I like the Common Core Standards because they are inclusive. The standards recognize that students must be exposed to and learn from all kinds of literature. They also require students to practice writing in many different genres. If society doesn't provide students with such opportunities, we are robbing them and ourselves of the company and contributions of creators of artful expression. If we leave genres such as poetry and fiction out of the curriculum, we are not sufficiently developing these creators, and we are not preparing informed and appreciative audiences to receive their words.

JB: Los Angeles Poet Laureate Luis J. Rodriguez recently published a poetry anthology, Coiled Serpent, that includes a piece by you and your student, Daniela. How did this project arise? What does it mean for one of your students to be published at such a young age?

TA: A better question, I think, is what it means to be published at any age. It means that what you have to say matters so much that people are willing to put money and effort behind your work so it can be read and appreciated by the world. Of course it is thrilling to see our names and our work in print, bound within a beautiful cover, offered up for the benefit of those who will read the book. All writers have this dream, and to realize that dream before graduating from high school, as Daniela has, is pretty amazing. Daniela is very humble, but she smiles big when the subject of her published work comes up. As for me, there is no greater affirmation of what I do as an educator than to see a student of mine become a published writer.

Luis J. Rodriguez, founder of Tia Chucha Press and the force behind Coiled Serpent, is an amazing person. He and his wife Trini have operated Tia Chucha's Centro Cultural and Bookstore in Sylmar for many years. The center hosts open mics every Friday night, exposing audiences to local music, poetry and other forms of discourse. Tia Chucha Press is a strictly voluntary enterprise that has the goal of publishing at least two books a year. After being named Los Angeles Poet Laureate in 2014, Luis decided that, rather than to gather his own work for publication, he’d publish poems from the diverse and talented array of poets “arising from the cultural quakes and shifts of Los Angeles,” as the book’s subtitle puts it.

You must get the book. It is beautiful, and every one of the more than 150 poets featured in the book is proud to be a part of it!

JB: What is your favorite lesson or activity to do with students to help them embrace poetry?

TA: There is an LA organization called Get Lit. "Breadcrumbs," the poem I wrote that's featured in Coiled Serpent, is dedicated to Get Lit founder and executive director, Diane Luby Lane. Her curriculum leads students through the process of claiming a classic poem, one written by, say, Dylan Thomas, or William Butler Yeats, or Gil Scott-Heron, or even Kendrick Lamar. After really getting to know this classic, ideally to the point of memorizing it and performing it, the students then compose their own poem in response to the classic poem each of them has claimed. It was through this process that my student, Daniela, composed what eventually became "A Temporary Whisper," her poem featured in Coiled Serpent.

One of my favorite parts of the process is a lesson I call “Say it one way, say it another.” Once students recite their claimed classic poem a few times, to the point where they think they’ve “got it,” I ask them to focus on a part of the poem and say it differently, either by emphasizing different words or syllables, changing the tone or applying a different affect. The intent is to lead them to the discovery that the language of the poem is only a part of the equation, and the interactive part, the part controlled by the reader or receiver of the poem, also contributes significantly to the poem’s meaning. The idea is that readers take a vital role in the creative nature of the work as well.

JB: You were one of the earliest E4E-Los Angeles members. What keeps you interested in this work and this community?

TA: E4E has been a breath of fresh air. In my 35 years as an educator, I have seen reform rear its head in fits and starts, rarely if ever taking hold in ways that significantly improve education, particularly in the secondary realm. Great ideas too often fall prey to opposing political ideology, lack of public interest, or the status quo. What I find encouraging about E4E is the organization’s recognition of the forces that prevent meaningful reform from taking root, and the relentless focus on improving education in the face of these forces.

The opinions, ideas and work of teachers are not only valued within the organization, they are paramount. E4E is a place where my status as classroom teacher makes me one of the most important people in the room. Another thing about E4E that amazes me, although it shouldn’t, is that opinions and ideas that at first appear to be in opposition to each other, or to be in opposition to those that may at some prior time have been espoused by E4E, are welcome and encouraged. The organization’s leadership recognizes that education is complex, just as people are, and that such complexity requires the lively and inquiring expression of ideas to produce lasting results, that honest and open dialog is critical to useful change. During my time on the Teacher Policy Team, we discussed a variety of ideas and counterarguments before our policy recommendations went to print.

In a polarized, gridlocked and often inflamed political arena that cripples progress, my hope is encouraged by the level-headed, respectful and passionately committed people who are E4E members to thoughtfully move education policy in a positive direction.